CPAP is a wonderful device that helps many who suffer from sleep apnea. As a sleep apnea patient myself, I don’t think I can live without it now. As great as a CPAP is, it isn’t the most exciting or sexy thing out there. But lots of people have been finding ways to make CPAP look less boring.

A man took this up a notch, making his own Alien CPAP mask. When his design went viral, some even made a version that can be purchased. Let’s take a look at this awesome work of art.

Jared Gray, an scifi author designed this super cool, and a bit scary, alien CPAP mask. The design is based on the facehuggers from the movie series, Alien. The alien CPAP mask that Gray designed looks like a movie prop used in the film itself.

What is a Facehugger alien?

Facehuggers, like the name suggest, are small parasite aliens that will latch onto a face (host) to insert alien embryos. They have 4 long legs that will wrap around the head and a long tail that wraps around the neck.

Once a facehugger gets attached to a host, it is almost impossible to remove. The rare case when it has been removed, the host has died. It was a memorable part in both the first and second Alien movies.

On the outside, it looks like an Alien facehugger mask, not related to anything CPAP or sleep apnea. It wraps around the head just like the movie. The main difference is the tail, which serves as the hose for the CPAP. Although the tail looks just like the movie, the tail doesn’t wrap around the neck. Wrapping the CPAP hose around the neck just wouldn’t be a very practical move, although it would make it more authentic.

Underneath, you can see where the CPAP part comes in. Gray uses a full facemask under the alien cover so it is still a functional CPAP mask.

Although it looks cool, I am someone that doesn’t want this much covering my face. I hate the feeling of claustrophobia and this is diffidently a mask that would do that to me. 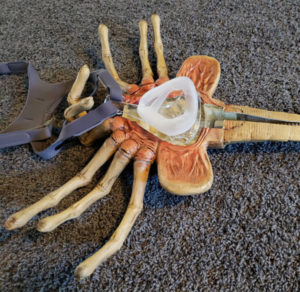 Can I get my own Facehugger Alien CPAP mask?

You could be like Gray and have a DIY alien CPAP mask. Facehugger mask  have always been popular and you can find them on amazon. You would have to custom and modify it to work around your CPAP mask. This would work for a full face mask, not a nasal mask.

Besides the Amazon option, there is this other one I found. Although it could be used as a standard Halloween mask, it is designed also to fit over a CPAP mask and the tail can cover the hose. This is available to purchase here and you can see some of the pictures below.  The site will have more detailed pictures.